Where do Fudge and Dungeons & Dragons intersect? The answer is the random alignment generator. Back in the 1980s, I owned a pair of six-sided alignment dice that I had ordered from the RPGA (Role-Playing Gamers' Association). The dice were white and bore three words repeated twice. The first die bore the words "Lawful" in blue, "Neutral" in green, and "Chaotic" in black. The second die bore the words "Good" in blue, "Neutral" in green, and "Evil" in red. To generate a character's alignment randomly, just roll the first die for those editions of D&D that had only three alignments, or roll both dice for the two-part alignment scheme that became standard starting with Advanced Dungeons & Dragons. Alas, it did not take long for the ink on the dice to smear and fade, leaving me with [what are gradually becoming] two featureless white cubes. 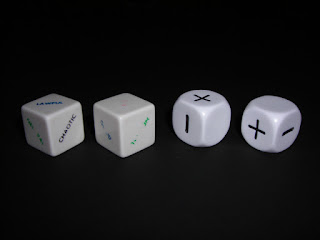 The solution is Fudge dice. These six-sided three-dimensional randomizers have three symbols repeated twice and lend themselves to the random generation of alignments better than the original alignment dice themselves. [Fudge dice have six sides that are marked "+" on two sides, "-" on two sides, and left blank on two sides.] For one thing, they are not merely inked, they are incised, which means they last forever. For another thing, only a single Fudge die is necessary, since the "+" and "-" symbols can double as Lawful vs. Chaotic and Good vs. Evil.


Combined, we may generate the following results:


Incidentally, all alignment dice are Chaotic. Use them at your own risk.

[What is Fudge? Learn more here.]

[Originally posted in Fudgery.net/fudgerylog on 7 April 2011.]