This is a simple method for penalizing player characters who neglect a basic survival necessity, and rewarding those who make the effort to do more than the minimum. It's compatible with nearly any iteration of old school Dungeons & Dragons, its retro-clones, its OSR relatives, and maybe more.

Characters must eat to survive, and they must eat regularly to function normally. For each day that a character fails to eat at least one substantial meal, the character suffers a -1 cumulative penalty to all actions and saving throws, i.e. -1 on the first day, -2 on the second day, -3 on the third day. The DM will determine, based on the character's Constitution and species, how many days the character may survive until starvation ends the character's life. Penalties commence each day as soon as the characters become active until they have their first meal.

If a character manages to have three meals in a single day and the third meal is consumed whilst resting, he or she recovers 1d3 hit points upon finishing it.

Water, or an acceptable liquid substitute, is also a necessity, and failure to drink also results in a -1 cumulative penalty to all actions and saving throws for each day of deprivation as above. The DM will determine how many days the character may survive until death by thirst occurs. Penalties commence each day as soon as the characters become active until they have their first drink.

Characters who fail to consume both food and water will suffer the penalties for both.

Starting on the fourth day of deprivation of either, characters will begin to lose 1dx hit points per day, where x equals the hit die type of the character's class.

Everyone has an alignment whether they like it or not. In some games, only three alignments are used: Nice, Wicked, and Questionable. There is a never-ending struggle between the forces of Niceness and Wickedness, and if you don't pick sides, then you are regarded by everyone as Questionable. But what do all these esoteric terms mean? Well...

Nice: Those of Nice alignment are polite, generous, and generally helpful. They are the sort of people you would introduce to your parents to win their approval.

Wicked: Those of Wicked alignment are rude, selfish, and generally a nuisance. They are the sort of people you would introduce to your parents to provoke their rage.

Questionable: Those of Questionable alignment are withdrawn, noncommittal, and generally overlooked. They are the sort of people you wouldn't bother to introduce to your parents.

In some games, three different alignments are used: Awful, Psychotic, and Dubious. There is a never-ending war being waged on the cosmic stage and in your own back yard between the Awful and the Psychotic, and those who stubbornly sit on the fence are Dubious. Let's define these terms, shall we?

Awful: Those of Awful alignment epitomize... something. They are Awfully... whatever it is they are. Sometimes they are self-described as Awesome.

Psychotic: Those of Psychotic alignment are unbalanced.

Dubious: Those of Dubious alignment are suspicious.

Some games are not content to have three alignments or three other alignments, so they combine and mix and multiply them into nine alignments, because that's preferable for tournament play. Let's see what they came up with...

Awful Nice: Creatures of this alignment are really quite pleasant. Some might argue they can be too pleasant to the extent that they may even "cramp" one's "style," but they are certainly reliably pleasant.

Psychotic Nice: This alignment really is too much of a good thing. Enough is enough! Sometimes people need some space!

Dubiously Nice: Being pleasant is one thing, but constantly doing it with a self-conscious sense of irony in order to appear "cool" or "hip" is blase and won't even endear yourself to other hipsters.

Awful Wicked: Creatures of this alignment are Wicked with style. They may be Wicked, but even Nice people have to give them some credit. They are the villains you love to hate.

Psychotic Wicked: Just steer clear of any creature exhibiting Psychotic Wicked tendencies. Paying attention to them only encourages them. If you value, well, anything, just stay the heck away.

Dubiously Wicked: Really, being Dubiously Wicked is not as impressive as you think it sounds. The alignment should be changed to Poser. You're fooling no one. Get a life. 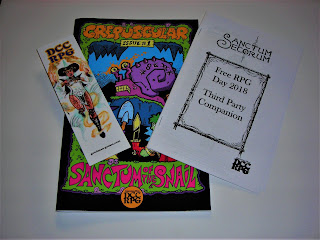 As you can see above, I was given the DCC RPG bookmark/character sheet of my choice, a copy of the Sanctum Sanctorum Free RPG Day 2018 Third Party Companion, and Issue #1 of Crepuscular, the very fine DCC RPG 'zine by Joshua Burnett, who also happened to be our judge.

The adventure we played was "Sisters of the Moon Furnace" by Marc Bishop. When I say "we" I mean all two of us, because there were two players, but we were given eight 0-level characters each to compensate. Towards the end, as our party had been whittled down to toothpicks, we were each given two extra characters for the final encounter. In the end, all of my original eight were slain, but one (or maybe both) of my reinforcements made it to safety. Alas, poor Greb the Gravedigger, who never flinched from danger and was mere cubits from safety, perished in the last moments of the adventure. Rest in Peace also Flope the Ropemaker, Squire Rendar, Herkimer the Hunter, Iggy the Noble, Grandalf the Guild Beggar, Hooloo the Herbalist, and Spudric the Potato Farmer.

Mr. Burnett has posted the official session report on his blog, the beautifully named Bernie the Flumph! If you get a chance to play DCC RPG with him, I suggest you take it. And thank you, Mr. Burnett, for a glorious if blood-spattered Free RPG Day!

I was pleased to support the latest Kickstarter project by Impact Miniatures (being that it fulfills my dream of having all the dice: d3, d4, d5, d6, d7, d8, d9, d10/d%, d11, d12, d13, d14, d15, d16, d17, d18, d19, d20, d22, d24, d26, d28, d30, a.k.a. the "One of Everything" reward level), but there is one catch to this wealth of randomizers: keeping them properly sorted. Keeping six different dice sorted can be challenging to a novice, 14 Dungeon Crawl Classics RPG dice can get confusing even to an experienced player, but 24 dice can vex anyone. A dice organizer for this many dice would be time-consuming to make, take up too much table space, and require fastidious attention to ensure that each die was in its proper place. Instead, I opted to make them easier to sort by re-inking the highest number on each die. I used a red Micron pen, which works well enough, but I think I will try using a sable brush and some paint to do a more thorough job.

Does it work? Yes it does and quite nicely, too. 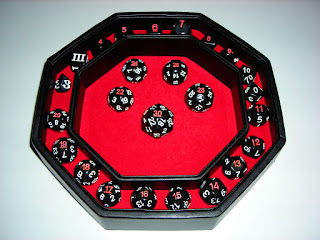 NB: I chose not to ink the d3 and d10/d% dice because a.) both of the d3 dice are obvious and b.) the high numbers on d10/d% dice can vary depending on how they are used.