The Thieves' Guild: A Guild Full of Thieves!

As far as I can tell, the only examples of a thieves' guild that predate Dungeons & Dragons are in two stories, one by Fritz Leiber and one by Miguel de Cervantes. My guess is that D&D only has them because of Leiber (and only has "Read Magic" as a skill for thieves because of Leiber's Grey Mouser, which is odd because his spellcasting ability was clearly due to his early apprenticeship to a hedge wizard and quick abandonment of that profession).

At any rate, I think it's interesting that an idea presented in fiction (and probably intended as an isolated or rare example) was adapted to be not just a common feature to all cities in a given game setting, but all cities in the game regardless of setting. Thieves' guilds, to my mind, should be an anomaly, limited to very unusual cities. Perhaps limited to one city per continent, if not one per world. Far more common, I think, would be cities full of gangs and rival criminal networks. These are better fodder for standard adventure plot hooks and random entanglements. A thieves' guild should be what it was intended to be by the writers who invented it: an exotic social structure that is almost a world unto itself. It should be an alternative to the player characters' typical experiences with the criminal element, something that puts them off balance, like a subculture or alien culture encountered for the first time.

I'll be house-ruling thieves' guilds out of existence in my own campaigns (except for isolated cases) and replacing them with gangs. Thieves' guilds should be unique, not ubiquitous.

(Thieves' Guild, the game of thieves and their guilds by Gamelords Ltd., is a topic for another day.)
Posted by Gordon Cooper at 1:46 PM 1 comments

Email ThisBlogThis!Share to TwitterShare to FacebookShare to Pinterest
Labels: thieves

Listen to the Sounds of the Aftermath

Glowburn, the podcast of the Mutant Crawl Classics RPG is now broadcasting from somewhere in the desolate wastelands or mutated jungles of what remains of our planet. Hear the disembodied voices of Judge Bill and Judge Forrest as they navigate life after the apocalypse.

Not Necessarily Beautiful, But Mutated

The Mutant Crawl Classics RPG Kickstarter is rapidly approaching End Times, so back it already! To accelerate your mutation, I encourage you to listen to these interviews with the game's creator, Jim Wampler:

Posted by Gordon Cooper at 9:44 AM 0 comments

The Mutants Are Coming 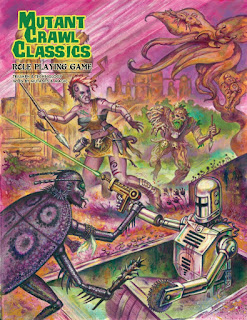 Far too much of my game collection has been hidden in boxes for far too long. Yesterday, I finally bought a large baker's rack (now a gamer's rack) to hold most of my games, and as I was unpacking I came upon this artifact from my early gaming history... 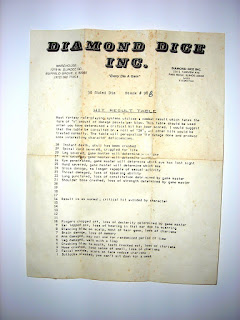 It's a complimentary critical hit table from Diamond Dice Inc. included with an order. I must have acquired it in the 1980s because I distinctly recall using this table when I ran AD&D in high school. I allowed my players to vote on whether the table should be used in our game and they voted unanimously in favor (knowing full well that it had an even chance of being used against them). The author is anonymous, but if he or she is reading this, I would like to say thanks for providing many entertaining consequences for my players' actions.

Here is the text of the table from Diamond Dice Inc.:

Most fantasy role-playing systems utilize a combat result which takes the form of "x" amount of damage points per blow. This table should be used after you have determined a critical hit has been scored. I would suggest that the table be consulted on a roll of "20", all other hits would be treated normally. The table will personalize the damage done and produce some interesting character deficiencies.

This may be heresy, but I am thinking of adding the Holmes Basic scroll rules to my Swords & Wizardry White Box game, but with one change: Instead of requiring one week per spell level to inscribe a spell, I'd reduce it to one day per spell level. In a campaign in which adventures occur in rapid succession due to certain events, there is very little time for study between them. Taking a week between adventures just to inscribe one first level spell simply isn't worth the time and effort even if a week can be spared. A fourth level spell requires an entire month to inscribe, just so it can be used once. It would be more time and cost effective to manufacture a magic item that can accomplish the same effect.

As for the material cost, I'd rather leave it for the individual Referee to set based on his or her campaign needs and setting requirements. Holmes offers a good base cost of 100 gold pieces per spell level (or silver pieces in the case of my setting), but some Referees may prefer to send their player characters on quests for the exotic materials necessary for producing spell scrolls. 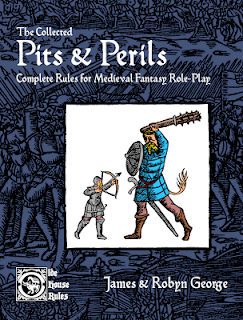 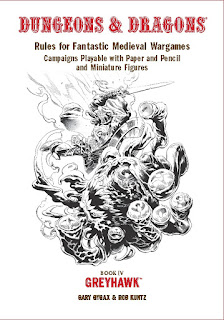 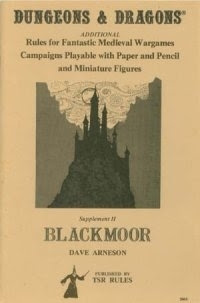 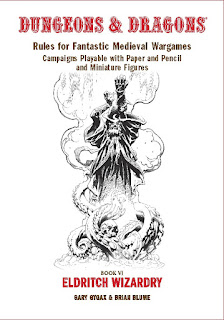 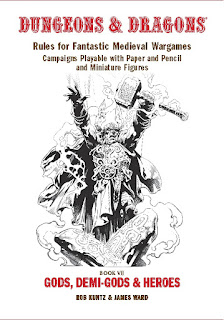 Posted by Gordon Cooper at 2:08 AM 0 comments

Yes, our beloved OD&D is both available and affordable again (in PDF form at least), and you can read a better article about it here in Semper Initiatavus Unum.

How to Knock Out a Foe in One Easy Rule

Knocking out — or being knocked out by — an opponent ought to be a viable tactic in an adventure game, but more often it is made too obscure or unwieldy in the rules of Dungeons & Dragons and its offspring. As an alternative (and as an encouragement in the use of this tactic), I offer the following house rule.

Any attack with a blunt instrument (either unarmed or with a weapon) can be made with the intent to knock out an opponent. The victim is entitled to a saving throw. If the saving throw succeeds, the victim takes no damage if a helmet is worn or half damage if the head is unprotected. If the saving throw fails, no damage is sustained, but the victim is knocked out and will remain unconscious for 1d6 turns or until revived. Opponents who are surprised suffer a -2 penalty to their saving throw; opponents who are attacked from behind suffer a -4 penalty.

Edged weapons with suitable non-edged surfaces (such as a sword's pommel or an axe's handle) may also be used as a blunt instrument for the purpose of this rule.

Last year was a quiet one for Applied Phantasticality. I posted only 12 articles, which is the least I've posted since I started this Web log. On the bright side, it gives me a low hurdle to overcome this year. I also have three other gaming Web logs that need my attention, so it remains a challenge nonetheless.

In 2016, I will be slightly adjusting the focus of Applied Phantasticality. Swords & Wizardry White Box has been moving to the center of my experiments with Old School Renaissance gaming, and it will remain an area of concentration, but this year I will also be giving a significant amount of attention to Dungeon Crawl Classics. (I backed the 4th printing Kickstarter project, so I should be getting my hardcover copy of the rules in April.) Session reports for both games will follow as soon as gaming resumes.

I'm still tinkering with my OD&D-inspired house rules, but I will probably hash out a definitive rule book before long.

Cargoes & Castaways continues to vex me for several reasons, one of which is its relationship to Swords & Wizardry and the Open Game License. (How compatible do I want it to be? Do I really want to deal with the OGL?) Then there is the issue of illustrating it (or not). I'd love to make it available in PDF and print, but until I can resolve those issues, it will languish in Limbo.

Whatever else the year has in store, I hope there will be plenty of gaming.