As with last year, this year's #RPGaDay consisted of single word prompts, and again, as with last year, I gave my responses to them on Twitter (this time a little more concisely). Here they are, collected in one space for your convenience.


#RPGaDay2020 1. "Beginning": An RPG that is good for beginning players is not necessarily bad for experienced players. The best RPGs put new and old players on equal footing, because they reward role-playing over rule-playing.


#RPGaDay2020 2. "Change": RPGs are more satisfying when player characters can potentially effect change in their environment. Otherwise, they’re little more than tourists in the setting.


#RPGaDay2020 3. "Thread": The common thread in most of the adventures I write or run, regardless of the game, is "help." Someone, in some way, needs help, and the player characters are in a position to offer it. In my experience, this works for any genre.


Except, perhaps, Kobolds Ate My Baby.


#RPGaDay2020 4. "Vision": Often the vision of a game designer is at odds with the vision of the creator whose work they are adapting. If you find an adaptation you like, be loyal to it, not to the latest company to snag the license.


And on that note, you can tell when a game is made with a love for, and understanding of, the source material versus the desire just to cash in on a recognized work. When you look past the graphics, is it still a good game?


You don’t even *need* the illustrations. You probably already have access to plenty of art inspired by the work or drawn from it. What you need is a well-designed game that faithfully captures the feeling of the original work.


That’s the game adaptation you support, even when it goes out of print "officially." Don’t settle for inferior games just because a new publisher now has the license. Support what you know in your heart you like best.


#RPGaDay2020 5. "Tribute": One of my works in progress is a role-playing game tribute to Jules Verne, Ray Harryhausen, and 19th century parlor games. I'd better finish it before I get stranded on a desert isle.


1. You encounter a wolfwere dressed like a typical grandmother. It has the power to transform into Graham Chapman.


2. You happen upon a ring of toadstools. Don't dance around it or you'll turn into a toadstool yourself. If you eat one, well, that's another random table.


3. You chance upon a house constructed entirely of candy and baked goods. If you're short enough, the resident will try to eat you when she catches you gnawing on her domicile. If you're taller, she forces you to renovate her home for 1d6 months.


4. You trip over, and enrage, a lion, which happens to have a thorn in its paw.


5. You step on a venomous snake. If you apologize quickly enough, you will be spared its scathing sarcasm and biting insults. In the best of circumstances, it's quite the amiable conversationalist.


6. You meet a werebear in mid-transformation. It's preoccupied with preventing fires.


#RPGaDay2020 7. "Couple": I like standard swashbuckling as a genre, but I also like it coupled with science fiction, fantasy, science fantasy, or mythology.


#RPGaDay2020 10. "Want": I want a.) more time to game, b.) a consistent weekly gaming schedule, c.) plenty of 12mm binary dice (no one makes them to my knowledge), and c.) for my players to be familiar with more of the literature that inspired many of my favorite RPGs. 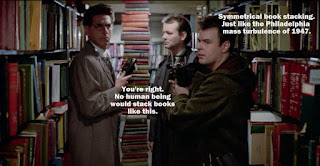 Seriously, though, I prefer my RPGs to be books or "bookshelf edition" boxed sets that I can store vertically on bookshelves. Stacking boxed sets makes me wince, probably because many of the old sets were fragile and half empty, which meant they were easily damaged.


#RPGaDay2020 12. "Message": Player handouts, used sparingly, can be beneficial to immersion in RPGs. Messages written from an NPC's point of view work better when they can be read and narrated by the players rather than the GM.


#RPGaDay2020 13. "Rest": Consider placing your katana on a rest within easy reach when you GM in case you need to behead any players who dishonor themselves. 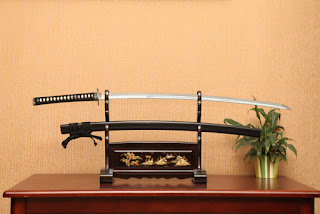 #RPGaDay2020 14. "Banner": For my first Gen Con (in the early 1980s at Univ. of Wisconsin—Parkside), we stayed at a campground where I noticed many of the tents had banners indicating their gaming club affiliation. I envied those clubs for their size and resources.


I've had my small gaming groups, but the only gaming club I ever belonged to was my junior high school D&D club and it never went to conventions or even had a banner. I longed to found a club, name it, design its banner, and attend conventions as a group.


It was a continuation of one of the themes of my childhood: inventing and being at the center of nonexistent organizations, in search of a sense of belonging and importance.


I think I was (and am) happier just gaming with small informal groups of friends, though. I don't want to elect officers, collect dues, or conduct meetings according to Robert's Rules of Order (like some war game clubs I knew of). I game for relaxation and entertainment.


#RPGaDay2020 15. "Frame": When I GM, I try to frame situations in terms of how people — not just the PCs — are affected. Society exists. NPCs are not cardboard standees. They have lives, dependents, hopes, fears, and individual motivations. It helps the setting breathe.


#RPGaDay2020 17. "Comfort": I am most comfortable running games that never (or almost never) require consulting a rule book at the table. If only all games were like that...


#RPGaDay2020 18. "Meet": I like it best when it is assumed that starting characters have already met and the players spontaneously “recollect” mutual memories and past experiences with one another.


Too often first sessions feel more like one is being introduced in a therapy group or a game show than joining an adventure party. "Hello. My name is Ray Zor. I’m a thief with no living relatives. I like daggers, dark cloaks, and brooding alone in the moonlight."


#RPGaDay2020 20. "Investigate": Investigation works well with nearly any (maybe even every) genre of role-playing game. Try it with your favorite fantasy, science fiction, or historical #RPG. Heck, try it with Teenagers from Outer Space. Nothing can stop you. #TFOS


#RPGaDay2020 21. "Push": Combat is more interesting when there are other options than causing damage. Try letting a PC who makes a successful attack push, grapple, or disarm an enemy instead.


#RPGaDay2020 22. "Rare": I do wish all role-playing games, regardless of rarity, were available at least in PDF form. It's fine for collectors to collect their collectables, but RPGs were made to be played, presumably by as many people as possible.


What is the point of an unobtainable game?


#RPGaDay2020 23. "Edge": If player characters want to strike with the pommel instead of the blade edge, I allow it, but the damage roll is reduced by one die step (in games that use polyhedral dice). In a dice pool game, I'd reduce it by one or two dice.


#RPGaDay2020 27. "Favor": The importance of which hand a character favors is woefully underestimated by most RPG character sheets.


#RPGaDay2020 29. "Ride": A good RPG session is like a good amusement park ride — they're both exhilarating. If that feeling is missing, it might be time to investigate the reason why.


#RPGaDay2020 30. "Portal": Role-playing, like reading, can be a portal to another world, which may also contain portals to other worlds. When I read or role-play something interesting, it transports me. Apparently through portals.


#RPGaDay2020 31. "Experience": Experience rules are fine if player characters are rewarded for the right thing AND progress is not too slow AND the benefits are neither too meagre nor overpoweringly great. Otherwise, just let the GM and players decide when it's time to advance.